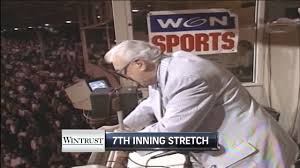 As the bouncing ball was gobbled up by Cubs sensation Kris Bryant my mind began to accept that this was real.  His off balance throw to Rizzo sealed the deal and the Cubs were World Champions for the first time in 108 years.  CUBS WIN!

This morning I was telling my 11 year old how unbelievable this all was.  I asked him if he knew who Harry Caray was and much to my dismay he had no idea.  That’s when I realized, this championship was so profound, so much more than a typical World Series championship; it’s a surreal experience that I’m sure every GenX Cubs fan is sharing right now.

Living a childhood in the 1980s meant the start of cable TV on which Chicago’s WGN was one of 15 or so stations.  Last nights riveting game 7 victory brought back all those years…a victory that for so many GenXers was for those who were – and are still – the Cubs.

Here’s to you Jody Davis, the King of Wrigley Field.  Your Cubs have made the others yield for the first time in 108 years.

Here’s to you Sarge, Gary Matthews.  Your quick bubble gum chomping face leading the outfield of the Cubs back in the 1980s.

Here’s to you Hawk, Andrew Dawson, your telltale split stance, steely stare and massive power gave joy to us all.

Here’s to you Ron Cey, the Penguin; your timely hitting and appropriate nickname manning the hot corner.

Here’s to you Ryan Sandberg (11:30 and 34:00) the low-key greatest 2nd baseman to ever live.  Your 1984 game vs. Cardinals was one of the greatest games I’ve ever witnessed and cemented my love for the Cubbies.

Here’s to you, pre-commercialized rooftops of the 80’s, a simpler time when you were just character in the Cubs fabric.

Here’s to you black and white TORCO sign on Sheffield Avenue.

Here’s to you Steve Stone the color commentator/analyst.  You were the perfect Robin to Harry’s Batman.

Here’s to you Ron Santo the greatest Cubs fan ever to live.  I know you’re re-defining happiness in heaven right now.

And finally, here’s to you Harry Caray.  Your style and love for the Cubs so contagious it defined what it meant to be a Cubs fan in the 1980s.  Moments after the final out, I closed my eyes and imagined what it would have been like to have you on that call.  Through the tears of joy, I could hear you…..

Congratulations 2016 Cubs.  Here’s to you for bringing back joyful childhood memories for all us GenX Cubs fans.

Thought Partner – What is it?