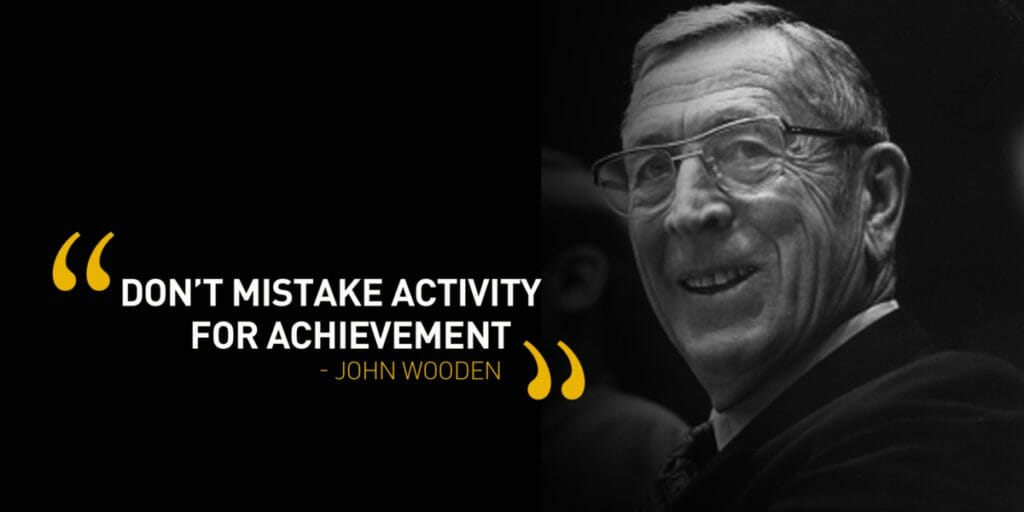 John Wooden, one of the greatest coaches in the history of sports once said, “Whether it be in your schoolwork, tennis or daily life we all need goals.  Success is not an accident, it is not luck or fate, it is predetermined.  Never has a champion in any facet of life after reaching the top, say “Wow, I wonder how that happen?”  Wooden was one for the ages and his ideals turned out to be set in science.

“Whether it be in your schoolwork, tennis or daily life we all need goals.  Success is not an accident, it is not luck or fate, it is predetermined.” – John Wooden

Psychology has found goal setting to be one of the most effective means for achievement.  Follow these 5 steps to create goals that lead to exceptional results.

You’ve undoubtedly heard of SMART goals.  There are a couple variations, but the one we use is to make your goals “S”pecific, “M”easurable, “A”ctionable, “R”ealistic and “T”ime-bound.  By making your goals SMART you’ll establish clearly what’s important to your leaders.  Your goals will be easy to understand and articulate and simple to measure.  Really I could write this blog just around making your goals SMART but there’s plenty already written on that topic.

Keep them to a critical few

A common mistake when creating goals is to establish too many.  In general try to keep the number of stated company goals to as few as possible.  Under 7 is a great objective and if you can distill them down to about 4 that’s perfect.  Science has shown most people have the capacity to recall no more than 7 items so when you create more goals than this, not only will your people find it difficult to recall all the goals, but they’ll also become frustrated.  Finally, by staying with a critical few you’ll force yourself to really narrow your focus down to what’s most important for your organizations’ success.

Make them simple to remember

Nothing is worse than having a really complicated goal that nobody can understand or articulate.  A very large contract research organization I worked with once had a stated goal of “2010 by 2010”.  This was how they articulated the goal of becoming a $2 billion organization by the year 2010.  People would walk around the company and as they made difficult critical decisions they’d go back to this mantra.  Keeping your goals simple are a surefire way to ensure your people work towards them.

Break them down into milestones

Taking your goals and breaking them down into meaningful chunks is a great way to ensure success.  8 years ago I took up triatholons and while I’d been an athlete in my younger years I was a perfect candidate for a “couch-to-sprint” training plan.  My goal was to finish a sprint triathlon by the end of that season (can you identify how this goal is SMART?)  Had I just started working out it would have been tough to achieve that goal.  Instead, I built my training plan with weekly milestones.  They started out difficult but achievable (i.e. “Run 1 mile, walk 1 mile”).  After I’d achieve that mini-goal or milestone, the next became progressively harder.  Doing the same with your company goals will help you stay on track and give you actionable data in the event you’re off track.

It’s easy to get caught up in the daily grind.  One gotcha I’ve seen is, after great goals have been written they’re put away in a desk drawer and forgotten until the end of the year.  If you’re writing an annual goal, then check in on it monthly or at least quarterly.  Anything less will not be effective.  If you’ve written a longer-term goal (3 year goal for example), then check in on it at least twice a year but again quarterly is better.  This regular measurement is critical to increasing your performance as it keeps you focused on the goal itself and gives you an opportunity to change direction in the event that’s needed.

Coach Wooden won an unbelievable 10 national championships as a coach.  No TEAM has more than 8.  If you follow coach Wooden’s advice on goal setting you’ll be well on your way to improving corporate performance and achieving success.

6 Actions to Better Align IT with your Business